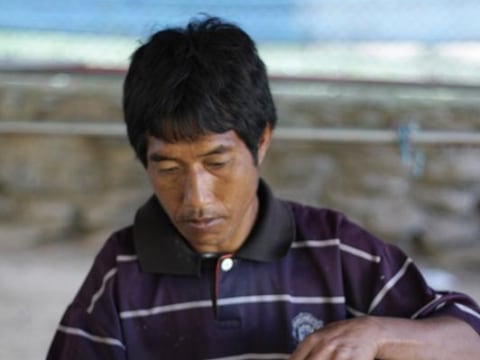 Tadi's loan finished fundraising, but these other borrowers need your support

Tadi was born in the jungles to a traditional Mlabri family. His father and mother were still nomadic hunters and gatherers when he was born. It was during his lifetime that slash and burn agriculture destroyed the forest to such an extent that the Mlabri had no option except to drastically change their lifestyle. He spent many years working as a field laborer before the hammock project began. Tadi has seen many changes in his lifetime and he feels like one of the few "bridges" between the old way of life and the integrated younger generation. Today, he supports his family by growing rice and weaving hammocks. He also holds a fascinating role as a language helper for University Professors studying the Mlabri language and culture. To this day, he will go out hunting in what's left of the jungle at the drop of a hat! For him, hunting is his connection to the traditional world he was born in. Tadi takes pride in weaving alongside his wife Yadi and appreciates the security that their shared weaving work offers. They have six children, so this loan will help them spread their weaving work across the calendar year and ensure their kids can focus on school -- creating new opportunity for the next generation.