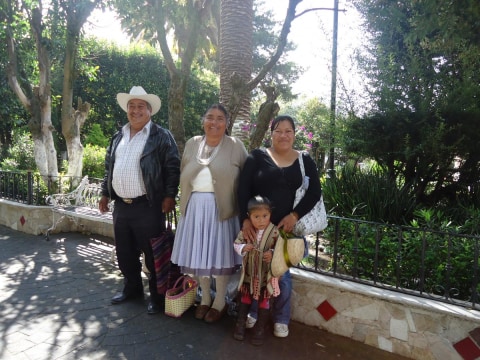 Familia Ramírez Group's loan finished fundraising, but these other borrowers need your support

A loan helped to buy raw materials to make crafts.

In a community of Mazahua culture (the term Mazahua means “Deer People"), a group was formed by three people who are very proud of their roots, who still use their native language and practice Mazahua customs and traditions. They would hate for their origins to be lost and for this reason teach their grandchildren all they can about their culture. Juana is 30 years old and has been married to José Luis for 10 years. They have a three-year-old daughter named Maricruz. Since she met her husband, Juana has been elaborating beautiful works in resin, a craft that her parents-in-law and husband began 14 years ago. Before, they made their living buying and selling lamps, traveling to different parts of the Mexican republic. Then, in the capital, they met someone who made objects out of resin, and decided to invest in these objects. They started selling the resin objects in the same places they used to sell lamps. Later, they began buying the raw materials to create the objects they wanted for themselves: small replicas of Diana the Huntress, owls for lawyers, eagles, figurines of Jesus Christ, angels, etc. Juana needs a loan to buy resin, paints and catalyst to make more pieces. Juanita, as they affectionately call her, explains that she and her husband usually go out to sell their products for two whole months, sleeping in the car so they don’t have to go back home. Their only difficulty is the lack of money to buy more molds, because each one costs between 500 and 600 pesos, depending on the size. But she doesn’t let this stop her, because she wants to continue growing as a craftswoman and modernizing her designs. *In the photo: Juanita is the woman behind the little girl. The photo was taken in the city park in the town where the group members live.