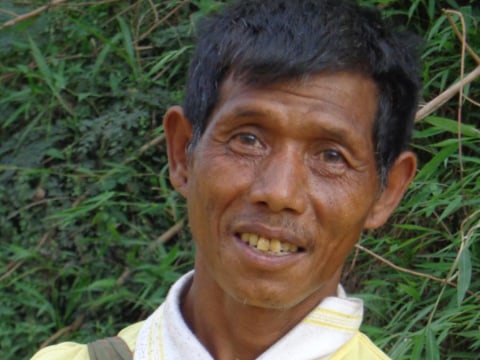 Somkid's loan finished fundraising, but these other borrowers need your support

A loan helped to make improvements to his workspace to have a more comfortable, secure place to make hammocks.

Somkid has worked hard to overcome the obstacles he's faced- for the traditional Mlabri who were raised in a hunting and gathering lifestyle, there has been huge upheaval in their lifetime. When their lands were destroyed by guerrilla warfare and teak harvesting, the Mlabri were left without options. Most, including Somkid, became trapped in a cycle of debt slavery as field laborers. Hammock weaving was the first opportunity that helped Somkid change his circumstances. Being illiterate in today's world has been a challenge for him, not to mention the detailed measurements, numbers and patterns that weavers must master! As he puts it, “None of that matters too much in the jungle.” But Somkid has done well for himself- he earns a stable living, maintains his traditional values and he's kept his fun-loving spirit. He is a great story-teller and he's making sure that Mlabri history and stories are still being passed down. He is married to Yalana and he is going to use his Kiva loan to make improvements to their house so that they have a more comfortable, secure place to weave and live.