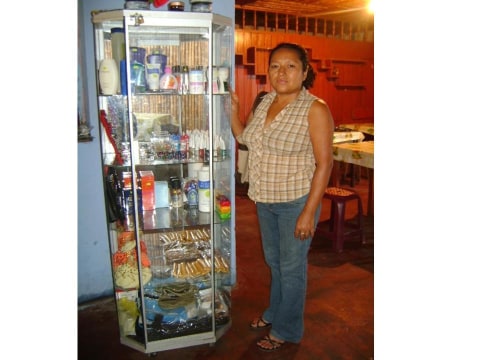 A loan helped To purchase clothing for ladies, gentlemen and kids, bed linen, and pig feed.

Flor is a member of the Community Bank "La Mujer Riojana" (meaning The Riojan Woman", and she lives in the region of San Martin of the province and district of Rioja. She is a nursing technician by profession, but she doesn't practice anymore because she prefers business. She sells clothing and bed sheets and she also raises pigs. She has a stable in the Democracia sector.

With this loan of S/.3000, which will be repaid in 6 months, she will purchase clothing for ladies, gentlemen and children, bed linen, and feed, such as Yellow Poui, soy beans, pig feed in sacks. This feed is needed to raise her pigs. She also wants to build more stables.

Flor is 36 years old, she lives with her daughter and husband. He is a laborer and in his spare time he is the driver of a motorcycle cab. In the future she would love to build her home and increase the numbers of stables to raise her pigs.