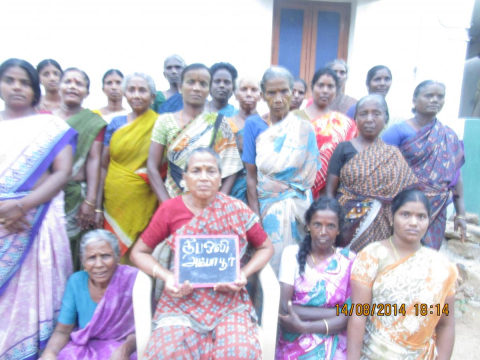 A loan helped to buy an energy-efficient cooking stove.

A group of 20 women formed a group named Deepaoli Self-Help Group in Ambapoor, a tiny village in Ariyalur, Tamil Nadu. Most of their fellow villagers, including these 20 women, work during the day as laborers in nearby industries and farms. They make just enough money to return to a home in the evenings and feed themselves and be able to repeat the same thing all over again the next day. It is harder for the women, who also attend to the myriad domestic chores, such as cleaning, washing and cooking. Apart from the physical exertion, it is the lack of respite from the dust and smoke, at work and at home, that takes a toll and makes them susceptible to health hazards. Lung diseases are extremely common. PAT (Micrograam’s partner) works to address part of the problem. They promote clean, energy-efficient cooking stoves, so that, at least while cooking, the women’s exposure to soot and smoke is minimized. The stoves use dung, agro-waste, etc. as fuel and so, have low CO2 emissions. They are also very cheap to run and help save significant amounts of money. So, Parameswari (featured borrower holding a board with SHG name) and her group have decided to buy these stoves. They are all married and most have young kids. They know it is imperative that they offer their kids as healthy a life as possible, so they can grow up and extricate their families from the poverty spiral they are trapped in. They do not have enough money to buy these stoves outright. They seek to borrow the requisite amount and repay it within the specified time.