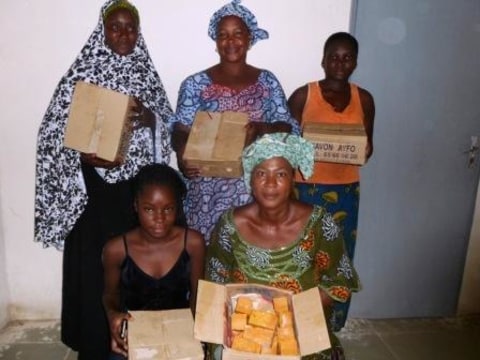 Djantoyerela Group's loan finished fundraising, but these other borrowers need your support

A loan helped to purchase raw materials for making soap.

Composed of five women, the group Djantoyerela has members who are married for the most part in monogamous households. The women average 31 years of age and three children each, and they all live in Ouenzindougou, Commune de Mandé, in Cercle de Kati. The women know one another through their tontines and their revenue-generating businesses in the district. The group members all have the identical revenue-generating businesses, just the selling of soap. Concerned about expanding their businesses, they decided to turn to the microfinance institution Soro Yiriwaso and are now on their second solidarity loan. Ms. Sitan (the woman sitting at the far right in the photo) has a good reputation, since soaps are highly prized by the women in Kanadjiguila. She intends to use her loan to purchase the raw materials for making soap to be sold later. She gets her supplies in Médine. She operates her business accepting cash from a customer base of women in Ouenzindougou. With this loan, Ms. Sitan plans on making an average profit of 45,000 francs CFA per month that will be used to meet her needs. And the rest will be reinvested in her business. Her goal is to develop loyalty in this partnership with Soro Yiriwaso in order to take advantage of many loans.