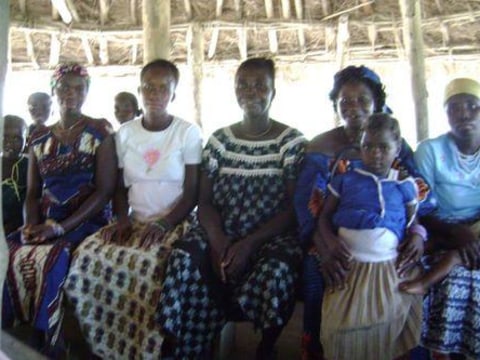 A loan helped To purchase palm oil for resale.

This is Yabom Kaprr S., Isatu K., Ramatu K., Thatha K. and Iye T.. They named their group Magbanie, after the village where the group leader was born. They are local entrepreneurs in a village called Massori, about fifteen miles from Makeni City in northern Sierra Leone. This is the second time they’ve received a Kiva loan through SMT. Previously, each one of them in the group received a loan of 500,000 LE. That loan created meaningful impacts in the lives of these borrowers. They were able to use the proceeds to pay for their children’s school fees. They’re also able to feed and clothe themselves and their children with the income generated from the loans. Today, they are requesting a loan of 700,000 LE each to buy more goods to add to their businesses.

Yabom (second from right) is the leader of the group. She is forty years of age. As noted earlier, she was born in Magbanie village. Marriage brought her to Masorie village, where today she is managing her business. She is married with one child. Her child is also married. Her husband serves as a local chief whose duties include arbitrating disputes among members of the community.

Yabom sells local produce like palm oil and pepper. With this new loan, she will expand her business: she will be able to buy an additional ten to fifteen barters (five gallons to a barter) of palm oil to add to her current stock. In the village of Masori, a barter of palm oil cost her 30,000 LE. She will pay a fare of 14,000 LE round-trip to transport herself and the palm oil to Makeni. So far, Yabom faces no serious challenge in her business worth noting. She enjoys what she does for a living.

To Fatmata and colleagues in the group, an increase in profit means making their lives better. They will be able to take care of their children, specifically with their educational and nutritional needs, as well as saving some for emergencies.