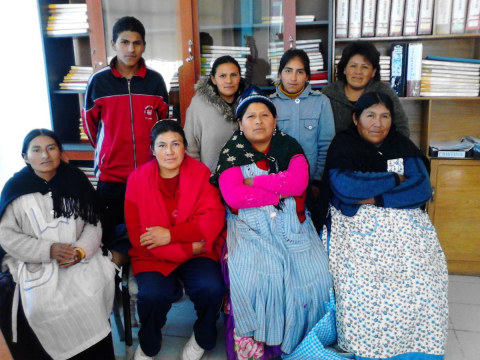 Communal bank 'Flor Kantuta' is on its second lending cycle with Pro Mujer as part of Cascada focus centre. It is comprised of eight members, with Nieves as president. The members have several businesses such as recycling, call shop, milk sales, transportation services, mobile phone accessories sales, ironmonger, food sales. The loan will thus benefit small entrepreneurs, among them Nieves. The latter says that she joined Pro Mujer one year ago, invited by a spokesperson for the institution who came to her house. She owns a scrap metal recycling shop, which she started years ago upon noticing that many items made of metal that end up discarded can be collected and sold on. She asks for a loan to increase her working capital by buying scrap metal from the people who collect it in the city of El Alto. She will then sell it to companies. Nieves derives from this business an income that enables her to support her family, since she is married and has six children. When asked what she likes about Pro Mujer, she mentions health services provided by the institution.