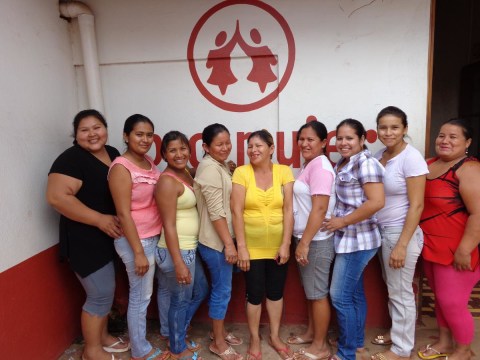 The “JHOHAN” communal bank is starting their 4th cycle with Pro Mujer, as part of the Guayaramerin regional branch. It is composed of 8 members and is led by a board of directors with Yancarla as the president. The member’s of the communal bank businesses are varied, amongst them are: food sales, clothing sales, the sale of sweets, selling perfume and selling plastic goods.

After the flooding that happened in Guayaramerin many micro-enterprises were affected as they lost the greater part of their merchandise and their work tools. Yancarla indicates that she joined Pro Mujer three years ago on the invitation of a friend who is a member of the institution. She says that after this natural disaster which affected her family, she decided to restart her economic activity as it is her only source of productivity. Her business is selling meals. She states that she started the business five years ago, observing that her products were much in demand by her neighbors so she decided to sell them.

The loan she is now requesting is to increase her working capital (buying kitchen utensils) that she will buy at the wholesalers in the city of Beni and later she will use them in her business. This form of work allows her to generate resources to support her family as she is married and has two children. When she was asked what she liked about Pro Mujer she replied that she liked the support the institution is offering her to reestablish her business and she likes the health care and medical consultations.