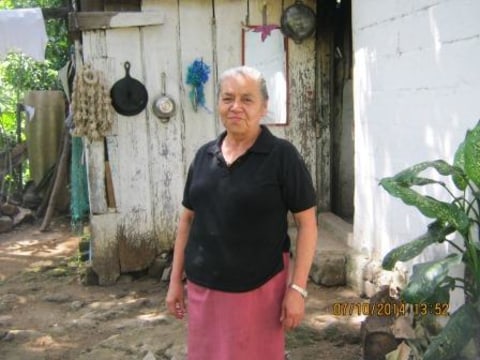 A loan helped to buy 500 blocks, 15 bags of cement, 2 quintals of iron, 7 metres of sand, a truckload of stone and labour for the construction of a kitchen.

Teresa, 62 years of age, is the mother of 12 children, 8 male and 4 female who are all now adults and have their own family. She is married; her husband makes a living in agriculture. She comments that with lots of work her husband and she have managed to raise their 12 children. The level of schooling that she has is fifth grade, as her parents didn't want to keep sending her to school, as to them it was enough that she had learned to read, so they sent her to graze the cattle that her father had and she didn't have time for school. Now in her home there only lives her husband, her youngest daughter and a granddaughter, and they are the only people who depend on her. Now that all of her children are older and married, she doesn't have another job other than domestic chores and taking care of her husband and granddaughter. She comments that since she was little her mother taught her these activities so she does them perfectly, and when her children were little she had to work outside of the house to make an income, and the same with her husband who had to work very hard to support their 12 children. Now, 7 of them work abroad and they economically support her and her husband so they can do the farm work of cultivating maize and beans. This loan will be invested in remodeling her home, specifically in the construction of a kitchen as the one that she has doesn't meet the necessary conditions, and this rainy season water entered the house and soaked their belongings. She will buy 500 blocks, 15 bags of cement, 2 quintals of iron, 7 metres of sand, a truckload of stone and pay for labour. Teresa has dreams: she wants to continue to remodel for her grandchildren, having a well remodeled house. She also wants to leave the country and go to visit her children in the United States together with her husband, that her children will be good people along with her grandchildren, and to have better crops in her fields.