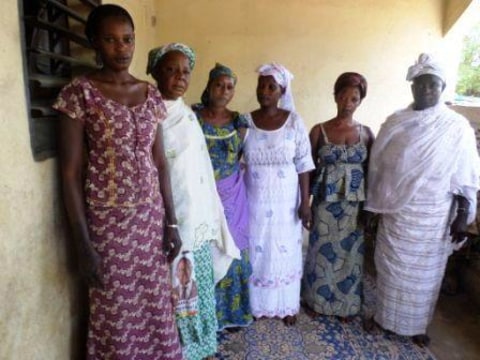 The six women who make up the Sérieux group all live in monogamous families. On average, they are 32 years old and have three children each. They all live in Médine, one of the neighborhoods of Ségou (fourth administrative region of the Republic of Mali). These women know one another through neighborhood, kinship and marriage ties and also through their income-generating activities in the neighborhood. They are involved in small retail, selling clothes, condiments and cosmetic products. In order to increase their businesses, they have decided to join Kiva's partner, Soro Yiriwaso, and they are on their second cycle of solidarity loan. Kadia, standing first from the left in the photo, is a major seller of wax "pagnes" (colorful West-African fabrics) in and around her neighborhood. She is planning to use her loan to buy eight pieces of wax "pagnes" in Bamako and Ségou. She sells her fabrics to both men and women, from home, at the Ségou market, and also door-to-door. Her customers pay her in cash and also often on credit. Thanks to this loan, Kadia is hoping to make an average monthly profit of 30,000 CFA francs which will be used to help her husband and also to increase her own business. She wants to continue her partnership with Soro Yiriwaso.