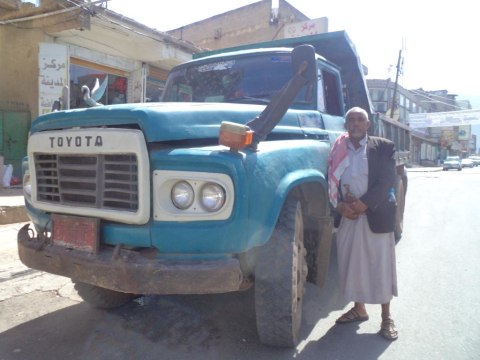 A loan helped to purchase a dump truck to transport sand and gravel to construction sites.

Mohammed is a 64-year-old married man from Ibb, Yemen and the father of 13 children. The eldest child is 27 years old. Though he is uneducated, he was aware of the importance of education and enrolled all the members of his family in schools and universities. Mohammed is a symbol of industry and hardwork. Since he was young, he was responsible for himself. His story started when he immigrated to Saudi Arabia to work, but his journey ended after some years when he was forced to come back to Yemen during the Gulf War in 1990. This was a critical point in his life. Mohammed didn’t surrender and decided to cultivate his own piece of land in the village and secure a decent life for himself and his big family. Year after year, he was able to accumulate a good amount of money to purchase his own house and dump truck to diversify his income sources. He uses this truck to transport loose materials such as sand and gravel to construction sites. This business is profitable, especially because there are not many dump trucks in the city to cover the increasing demand; Therefore Mohammed decided to buy another dump truck. The problem is that he doesn’t have enough money, so he applied for a loan in the amount of 1,500,000 YER from Al-Amal Microfinance Bank. Mohammed is sure that purchasing another truck will increase his income and he will be able to successfully repay the loan and pay for his children's marriages in the near future. Mohammed looks forwards to purchasing another bigger and better dump truck and will encourage his children to work on the other two trucks to cover their expenses and become independent.