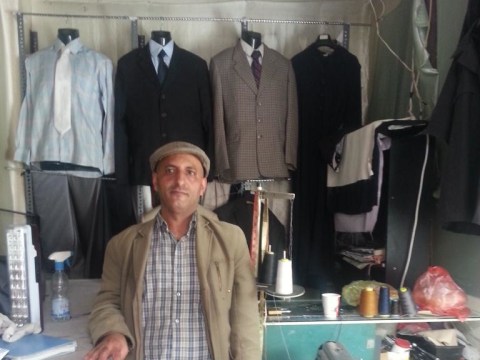 A loan helped to purchase large amounts of fabrics to meet all the demands of his customers.

Rashad is a 44-year-old married man with four children. His oldest child is 15 years old and the youngest one is 3 years old. He is living with them in Sana'a, Yemen. He is a very active and responsible man. He has a university education. Due to high rates of unemployment in the country, Rashad couldn't find a job to look after his family. He didn't surrender to his condition but decided to work in one of Sana'a's hotels. He worked as a waiter in a high hotel. From that business, Rashad could accumulate a good amount of money, and he opened a sewing store and worked as a tailor. In his store, Rashad is sewing all kinds of stylish men's clothes. He makes modest profits. For further expansion, Rashad applied for a loan of 100,000 YER from AMB in order to purchase large amounts of fabrics to meet all the demands of his customers. Rashad looks forward to further expanding his business through opening other branches in the capital city of Sana'a.