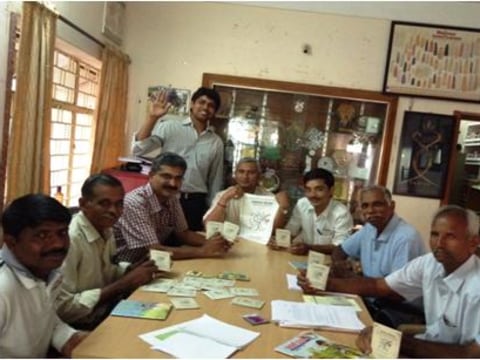 A loan helped to procure and market traditional seeds for an organic village project.

The featured borrower is part of the Desi Seed Producer Company (DSPC). Desi Seed Producer Company is a farmer-driven network of organic seed producers founded on sustainable agricultural practices engaged in the production of traditional food crops seeds, organically. The farms are certified by the Institute for Market Ecology (IMO) agency under the group certification scheme. DSPC works with small and marginal farmers practicing organic farming across Karnataka. They strive to create an uncontested market space for traditional seeds and directly linking them to consumers through public awareness, media and social networking. Farmers and rural bodies like SHGs are involved in post-harvest activities in order to lessen the over-head expenses on the company, and in tandem, generate employment opportunities to enhance sustainable rural business climate. Praveen (standing with his hand raised) has pursued his B.Sc Plant Biology and MBA Environmental Management from a reputed institution in Tamil Nadu. Since 2012, he has been closely working with seed producers across Karnataka, strengthening community seed supply systems under a SWISSAID project. He is residing in a rented house at Bangalore with his brother while his father and mother stay in a village in Tamil Nadu. The ten group members require a loan for the procurement and marketing of traditional seeds for an organic village project under the Karnataka Agriculture Dept. A total of 27 hobli (defined as a cluster of adjoining villages administered together for tax and land tenure purposes in the states of Karnataka) require seeds worth Rs.8 lakhs.