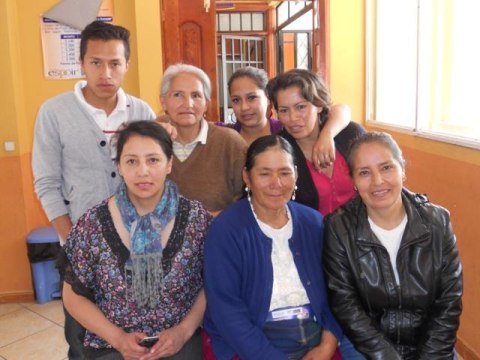 A loan helped to buy chairs and tables.

The credit group La Florida is made up of 7 female members and 1 male member who live in the city of Cuenca, a city known as Santa Ana of the 4 Rivers, and since December 1999 has been a Cultural Heritage Site. It has a rugged terrain and has many places to enjoy nature. Its people, like all of the members, still maintain the culture and traditions of the towns, and are friendly, kind and hard working. One of the members of this group is a woman named Maria. She has formed a part of the credit group La Florida for the past two years, during which time she has even further strengthened ties of friendship. She likes this form of loans because the loans help her to grow her business and also to share great times with her friends in the group. Señora María is 54 years old. She is a single mother with three older children who are married and live on their own. She doesn't have her own house, so she rents. Doña María makes a living selling food, work that she does out of her house. She has been doing this work from Monday to Saturday for the last 6 years. The money from this loan is to buy tables and chairs. Her goal is to have her own house.