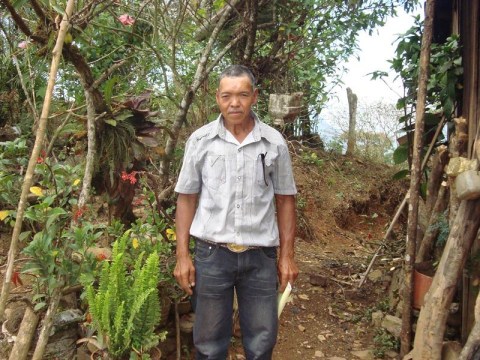 A loan helped to buy a solar panel system.

Pedro is 54 years old. He has lived in the Sardinal community since he was 9 years old. He studied in public school until the third grade in elementary school; he learned the basics like reading and writing and says he wishes he could have become a professional but regrettably this wasn’t possible as he was the only male child and had to work with his father in agricultural labor like planting basic staple grains and vegetables. He also worked in ranches during the coffee harvesting season to earn extra money and thereby buy personal items. When he turned 18, he was recruited for the military service which was mandatory in those times. He thanks God for coming back alive in those difficult times. Today he has his land with apples that he tends to, and they generate income to survive and to support his mother. In this community they live in darkness. today he says he e is happy to have the chance to get a loan to buy a solar panel system to have light in the house where he lives.