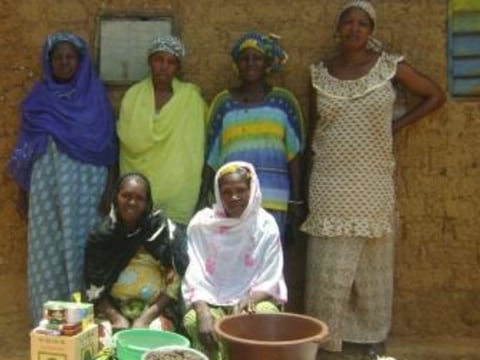 A loan helped to buy cups.

The six members of the LAFIA group are married women, who are on average 42 and who have on average five children. They live for the most part in traditional families in KAMALEN SIRAKORO, one of the popular neighborhoods in the city of Sikasso, the third administrative region of Mali. They are on their twenty-first group loan with microfinance institution Soro Yiriwaso in order to satisfy the needs of their clientele. Their previous loans have been properly repaid. Mrs. Ramatou, standing to the far left in the photo of the women of the LAFIA group, sells cups. With her loan, she plans to buy large quantities of cups at the grand market, where she is heavily sought after for the quality of her cups, which she will resell at retail for cash or credit at KAMALEN SIRAKORO to a clientele composed mainly of women. She foresees earning an average of 56,000 CFA per month, a portion of which will be used to repay the loan and its interest and the other for savings.