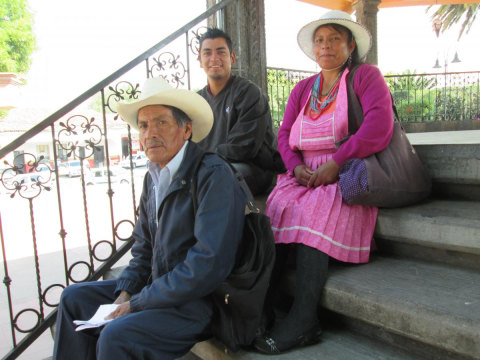 A loan helped to buy tools with which he can continue to offer his services.

Jorge, Ángel and Augustina decided to form a group to request a loan from VisionFund Mexico. They say they formed the group when Ángel became worried about stocking his grocery store, which he has had for 20 years. Ángel confidently approached Jorge, who now is the representative of the group because he is the youngest of the three (Jorge is in the center of the photo). Jorge had the vision to look after the business his father left him when he died. This business was for many years an economic tool that gave his father the opportunity to provide for his family. Now, Jorge is again requesting a loan to buy tools with which he can continue to offer his services. “It’s a real satisfaction to make people happy with your work,” says Jorge, who at 27 years and without responsibilities is working to preserve the excellent inheritance his father left him. Now he would like to start a feed sales business, because a majority of his community works raising cattle. Jorge has noticed the need for a business like he has in mind so that his neighbors do not have to travel to the center of the municipality to buy feed for their animals. He says that thanks to VisionFund, he will be able to make his dream a reality. Agustina is another member of the Centro De Riyos Group. She was motivated to join the group by observing how well it was going for the other members. Agustina works selling groceries. She says that she does not have in her little store all of the products that her neighbors ask for, which makes her sad. But she is happy to continue with her business, and thanks to loans from VisionFund, she has been able to better stock her store. Now the three share the same thinking, which is that if they make their payments on time, they will be able to continue to enjoy the benefits of Kiva and the organization.