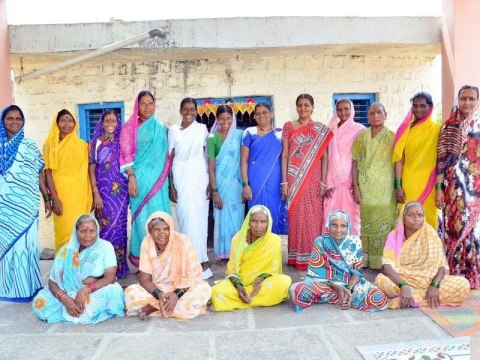 A loan helped to buy a buffalo.

Renuka is 44 years old (she is the woman who is standing with her hand raised in the picture) and lives in Kagawad village, Athani, Belgaum. She is a former Devadasi. The devadasi system is an ancient tradition in which a young girl is married or ‘dedicated’ to a deity and would perform religious rituals. The realities of a devadasi are extremely challenging since the young women are not able to complete their education, learn employable skills, or otherwise provide for themselves. The young women do not have a choice in this life-long decision which often leads to exploitation, poverty, and social exclusion. Renuka lives with her younger sister who is handicapped and her elder brother’s son's family which consists of his wife and children. Renuka has two children. Her elder son is studying in the 8th grade while the other one studies in 6th grade. Her main sources of income are animal husbandry and agriculture. Renuka has a few goats and buffalo in her farm. She sells milk at the KMF federation situated in her village and uses some milk for their household purposes. She also does labor in agricultural fields. She earns around INR 4,000 per month which is not sufficient to run the family. She now wants to improve her farm for which she is seeking a loan of INR 20,000 to buy one more buffalo. Renuka will use the additional income for her children’s education and she hopes to save enough to secure her future. The other 18 members of “Ambedkar Mahila Swasahay Sangh” Self Help Group (SHG) are requesting a loan for different purposes: twelve of them for goat rearing, five of them for buffalo rearing and one of them for a pan (an edible prepared by wrapping herbs and spices in betel leaves) shop. All the members are former devadasis and are fighting rigorously to eradicate this system. They all are trying hard to convince people in their village not to push their daughters into this unacceptable system.