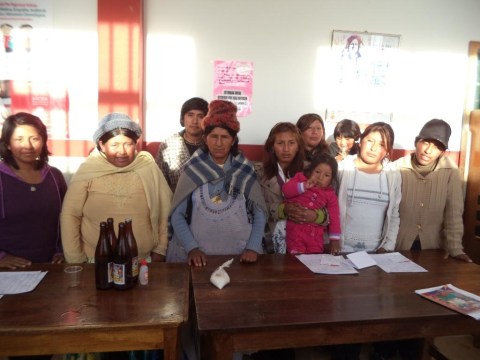 The "Cochalitas" communal bank is entering its fourth cycle in Pro Mujer as part of their Senkata regional office. The group is made up of eight members, and is led by a board of directors of which Danitza is the president. The members are involved in a variety of businesses including: selling car parts, selling food, selling athletic clothing, beauty salons, selling fruits and vegetables, tailoring, selling beer, and weaving. The loan will be used to help small businesses of which Danitza is a member. She states that she joined Pro Mujer one year ago after being invited by a sponsor of the institution who visited her at her home. Currently, she has a business selling car parts, a trade that she learned from helping her parents in their business. They worked in their business constantly, and with some savings, she decided to open her own business. The loan that she is receiving will be used to increase her capital (purchase car parts in bulk), which she will acquire in Chile, and later sell in her store. This form of work allows her to generate an income to support her family, as she lives in a common-law marriage and has two children. When asked what she likes about Pro Mujer, she states that she likes the savings that are offered by the institution.