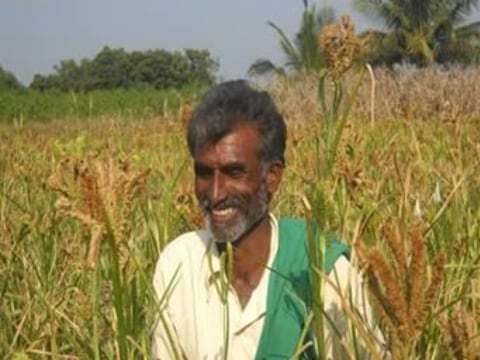 A loan helped to set up a showroom of organic vegetable seeds, desi cotton and millet.

Nagappa is one of the few farmers who have literally turned the tables, not just in his village but across a belt in North Karnataka. Post 1947, when British colonial rule ended in India, the government stressed the adoption of high yield varieties of various crops that included cotton. India had its own rich heritage of cotton varieties, which for their short staple were a favorite of European hand-looms. Many Indian cotton types are also considered to be high absorbents and preferred in surgical processes. But later the government made farmers adopt the hybrid seeds for higher production. This process got a further boost during India's green revolution in the 1970s. As the world started to look for more choices for different clothing types and more environmental concerns were raised, a need in markets was felt for cotton that was not hybrid. Following the trend of a growing demand for this kind of cotton, some local NGOs in India decided to persuade some farmers to adopt again the traditional varieties. Initially there were few takers, but Nagappa was one of them. Nagappa has dedicated himself to organic cultivation of desi (traditional) fiber crops for a long period. His family has been in cotton farming for generations. He alone has revived 24 desi cotton varieties, some of which are currently cultivated in more than 200 acres of land in Makiri village, a rural pocket some 20 kms away from Bydag, Haveri district. He is supplying manufacturers that are creating brands using only organic cottons. Nagappa has laid a foundation for other farmers to learn how to tap the potential of sustainable agriculture. He requested this loan so that he can set up a showroom of organic vegetable seeds, desi cotton and millet for clients and other farmers. His dream is to make his farm a biodiversity center that can be a breathing place for people with similar notion and mindset.