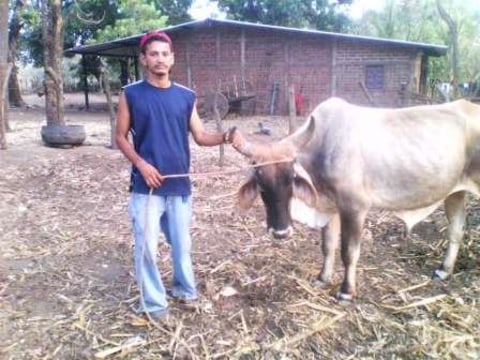 A loan helped to buy a team of oxen.

Miguel is 28 years old. He stopped going to school because his father died when he was young. In addition, he was the older brother, and he was obliged to work to help the household. He managed to go to school through the 8th grade. Now he is married, and his partner does the household tasks. He has a son who is going to school. All his life, Miguel has raised corn, which has provided his daily sustenance. He cultivates three hectares of corn and also beans, which were left to him by his father when he died. His land is at a distance of 8 kilometers from his house, and he has to walk every day. He will invest this loan in buying a team of oxen, which he needs to be able to go every day to his land where he raises corn and beans. In addition, this will improve his quality of life, and he will also make trips hauling water in a cart that these bulls will pull. This will give him another income, and he will also be able to haul the sacks of grain to his house from the land where he grows it, and he will save on transportation costs. His dream is for his son to go to school with no problems and to graduate from school, and to give him this support that his father gave him when he was a boy but due to life circumstances was not able to continue. He knows that he can accomplish his plans with the help of the loans.