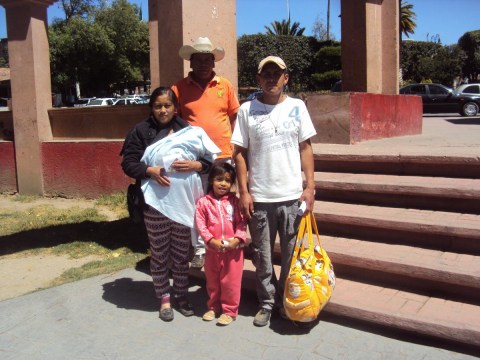 Previously the majority of people in the villages did not wear shoes and wore the dress that identified each one of its regions. With the passage of time, the phenomenon of migration began in the regions of the State of Mexico, in which inhabitants of the communities began to go out to the big cities in search of a job or a better quality of life. This is how fashion clothing began to arrive in the regions. After that, another business expanded that gave several families the opportunity to start selling clothing. Eduardo, Griselda, and Evodio are some of these people who decided to start selling clothing. They tell us that it has been 2 years since they started this type of business, thanks to their family members motivating them to create their own economic activities. Eduardo started by offering his customers socks and men’s and women’s underwear. Thanks to the fact that he has worked arduously, and with the help of Griselda and Evodio, they have been able to open a store near their house. With a lot of effort, dedication, and love for their business, they can now offer their customers men’s and women’s pants, tops, shirts, vests, overcoats, t-shirts, and sweaters. Also, thanks to VisionFund Mexico, they have been able to expand their business and are able to offer their products not just to their neighbors. They go out to different street markets outside of the state to sell a large variety of the merchandise they offer. With the loan requested, Eduardo will buy pants, tops, shirts, sweaters, and jackets, since it is what his customers buy from him, and with it he will be able to have the money so that his children Mariel, 4 years old, and Eduardo, only 2 months old, will have everything they need. Eduardo also notes that he wants to save so that his little girl can start school, not lack anything, and be able to buy everything the school requests of them. Griselda and Evodio also invest in their clothing store and will buy the same items as Eduardo, since they are partners in the business. They are the 3 people who make up the Familia Miranda (Miranda Family) group and have benefited from the support that VisionFund México offers. In the time they have been working with the foundation, they have seen great progress in their business, and this has pushed them to move forward with the goal of offering their family members a better quality of life. With their earnings, they can offer the essentials at home, and their business also gives them the opportunity to fulfill their obligations to the organization that has believed in them and has supported them so that their business would be fruitful and so that in the future each one would have their own store, but not forgetting that with the help of the 3 members they have been able to move forward.