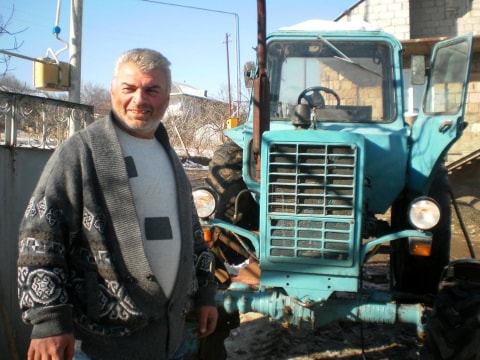 Sirak's loan finished fundraising, but these other borrowers need your support

A loan helped to buy spare parts for tractor and to repair it.

Sirak lives in the village of Aknaghbyur in Tavush region. He is married and has a large family: a son and two daughters. His son works at the military police as a man of duty. For many years Sirak worked as a mechanic, but now he is engaged in farming and agriculture. He also has a tractor of his own, which he uses to do paid agricultural work around his village. He has a cute farm where he takes care of two pigs and thirty chickens. He has a lot of land where he cultivates vegetables (potato, tomato, carrot, greens) and fruits (fig, apple, plum, grape, and pear). On his land he also grows hay, which he sells as fodder for farm animals. At this moment Sirak’s tractor is out of order and he is very worried about it. He asks for a loan of 1,200,000 AMD to buy spare parts for his tractor and to repair it, since he must quickly be ready for spring season sowing.