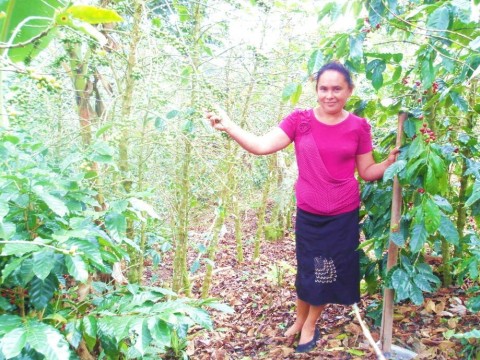 Mariana's loan finished fundraising, but these other borrowers need your support

A loan helped to buy agricultural supplies for her coffee crops.

Mariana is a woman with a sixth grade education. This is because her parents did not continue being together as a couple. They separated, and she was not able to continue her education. Nor did she have the resources to continue studying. Seeing that she did not have any kind of a future, she emigrated to another place where she had family. She did this when she was 19 years old, and she managed to learn the trade of growing coffee. After some years she met the man who was to be her husband. They had three children. Due to health problems that her husband had during the last few years, they spent a lot every day on medicine and treatments. She has been a widow for four months. Her children are her only support. The oldest is 26 years old, and he got married. However, he continues to live in her house with his wife and their child. The second child is a seven year old girl, who is in the second grade at the community school. Her last child is three years old. She has been growing coffee on her own for eight years. A cousin and his deceased wife gave her a ‘manzana’ [a land measurement unit equivalent to 7000 square meters] of land to cultivate. It was through her effort and her husband’s that they managed to plant coffee and make a small farm by expanding their crops little by little. Now that she is alone, she is in charge of all of the activities having to do with the coffee crops. The property that she works is located on the same land where her house is built. Therefore, she tends her crops in a very reliable way. One of the biggest challenges that she has is that part of the coffee was infected by coffee rust. However, she is working hard to recuperate, thanks to the leaf insecticides. She fears that this disease will return. Now that her husband is not here, the people that help her with the field work are her children. She also pays workers during certain seasons to clear the fields and to cut. She is requesting help to buy agricultural supplies that help keep the coffee crops healthy and free of coffee rust and other diseases. Her income depends on this occupation as does the support of her family. Mariana dreams of her children getting an education and a career. If possible, she dreams that they are able to attend the university.