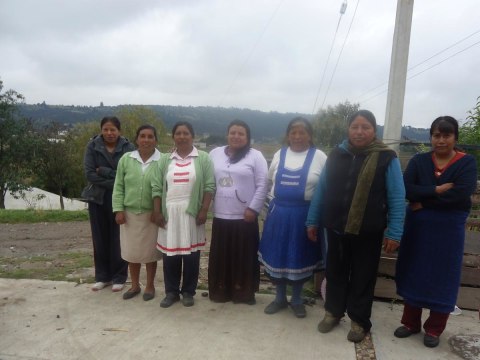 The group “Barrio La Cañada” consists of eight women. All of them are hardworking and possess the drive to succeed in their businesses and to help their families get ahead. They have known each other for several years and over time they have established a great and sincere friendship.

These women live in a Mazahua community where some of the people communicate in their indigenous language. A few of the women still wear traditional garments that stand out because of their bright colors. Other things that their community is known for are the green pastures and lush vegetation that exist against a backdrop of beautiful rolling hills.

Adriana, age 27, is a member of this group. She only has a high school education and is always known for being cheerful and in very good humor. Adriana and her husband Ángel are in a common-law relationship. He works as a bricklayer and the two of them have formed a family that has five children, two of whom are in school.

Adriana has managed a grocery store for the past five years. This time she is requesting a loan in order to buy more grocery products such as bread, eggs, milk, soft drinks, canned goods, and other items. She says that she opened her grocery store because there were no other places to buy products in the area where she lives. Thanks to the loans, Adriana says that she has been able to maintain her grocery store and acquire a little bit of everything so that she can keep her customers happy with her service.

Adriana’s business is doing very well. Every day she is able to generate a good amount of revenue from her sales. Her only challenge she faces now is the competition from other stores nearby. However, she is not discouraged by this situation. On the contrary, she wakes up early every day so that she can begin working. Adriana hopes that her revenues don’t decline because her only ambition in life is to have a larger shop and convert it into a variety store.

Adriana says, “My greatest wish is to help my children with their studies since I was not able to continue my education.” The members of this group are grateful because the loan will keep their businesses going and allow them to expand, as well as increase their profits. Doña Irma, María Elsa, Verónica, and María Juana will invest in their grocery stores. Rosario and Ma Rosario will invest in clothing. Marcelina will buy chickens.