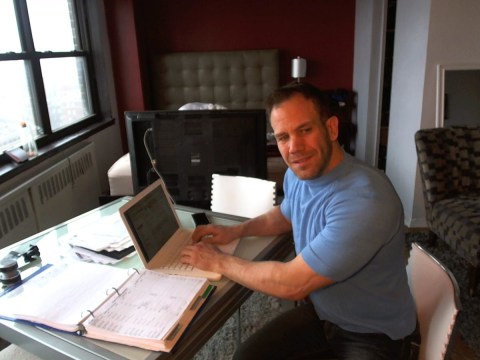 Nicholas's loan finished fundraising, but these other borrowers need your support

A loan helped to pay for marketing efforts and legal fees for copyrighting.

Nick has always been passionate about theater. He holds a graduate degree in Film and Screenwriting from NYU and a Bachelor's degree in Theater and English Literature with a concentration on Shakespeare. However, after graduating, Nick surprisingly found himself somewhere other than theater. For 15 years, he acted as a marketing executive, leading development and executive teams in TV, Print, and Digital marketing. Unfortunately, Nick was laid off in 2012, but instead of feeling down and discouraged, he sought out the silver lining. “Most people would have been devastated at being laid off, but it made me very happy and excited. I figured it would be the perfect time to do something that I’ve been passionate about for decades.” In April 2012, Nick opened First Folio Productions, where he introduces Shakespeare to today’s younger generations through digital textbooks that are accessible via iPad, iPhone, Android, and any laptop operating system. One of First Folio Productions’ first products was a digital textbook of Shakespeare’s “Hamlet,” which included a modern film adaptation of the play and original recordings of two songs. Nick says that the advantage of digital textbooks is that “unlike paper textbooks, digital textbooks can also include audio and video content as a way to bring Shakespeare’s great work to life for the younger generation and students of all ages.” Several schools around the country have turned to Nick’s digital textbooks to teach their students famous Shakespeare works like Othello, Hamlet, and Romeo and Juliet. Now, Nick needs your help. With this loan, Nick will strengthen his marketing efforts with online ads and brochures. Nick will also use the loan to pay for the legal fees associated with copyrighting the textbooks and audio and visual content. Help this Shakespeare aficionado by contributing to his loan today. Check out Nick’s business at firstfolioproductions.com.