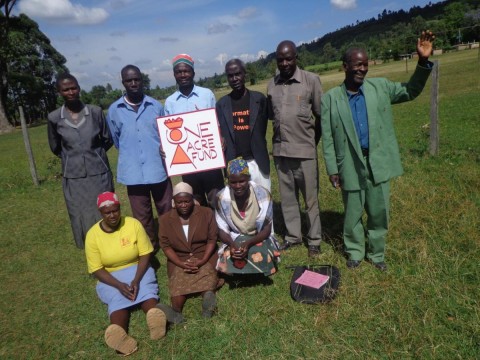 A loan helped to purchase hybrid seed and fertilizer for the cultivation of maize, millet, and sorghum.

Francis is a member of this group in Matete District. He is pictured here in a group of eight One Acre Fund group leader farmers. The group leaders represent a total of 80 individual One Acre Fund farmers who are not pictured here. Francis has been selected to act as the Kiva group representative and is standing on the right with his hand raised. He and the other farmers represented in this group are each receiving inputs for ¼ acre of maize and ¼ acre of sorghum or millet. Each farmer is receiving an average input loan of 5,349 shillings for maize, millet and sorghum cultivation. Francis is married and has six children. He is 58 years old and is known as friendly. He is active in his community in groups such as the burial committee. Francis has been a farmer for 40 years. Francis described his harvest as good last year, but believes he can have an even better one this year by continuing to work with One Acre Fund. Francis first enrolled with One Acre Fund in 2012 and is now preparing to be a One Acre Fund farmer during the 2014 Long Rains season. Francis joined One Acre Fund in order to earn enough to feed his family. He also volunteered to be a group leader and Kiva representative because he is an active community member. Francis plans to use the money that he earns from his next harvest to send his children to school. He notes that working with One Acre Fund has led to many benefits for One Acre Fund farmers. Francis’s own life was improved because he was able to save money. Francis and his group need a loan to cover the initial costs of purchasing the seeds and fertilizer through One Acre Fund. One Acre Fund will repay the Kiva loan on behalf of the farmers through the profits from the farmers’ harvests. One Acre Fund pre-purchases the seeds and fertilizer when prices are low and passes the cost savings to the farmers. Throughout the planting and harvesting season, One Acre Fund also provides training and support to the farmers as they make payments back to One Acre Fund. With support from One Acre Fund and your loan, these farmers will have a chance at a successful harvest, increased profits and improved lives. The field officer is also included in the photo and is standing on the left in the photo.