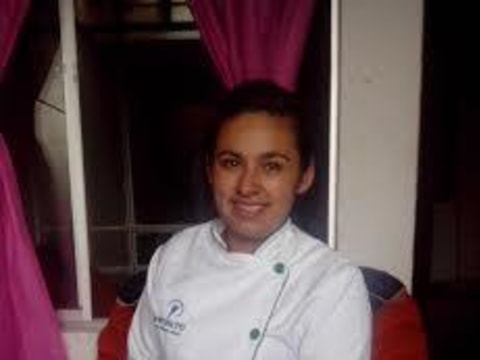 A loan helped to pay one semester tuition.

This is the story of a young woman named Jhoumlyn, who had had the dream of becoming a cheff since she was a little girl. She always liked to be next to her mother and see how she cooked. That is how she started to practice. Although she was not an expert at first, she did not give up. A few years passed by and she became much better. Her family was happy seeing that she did not make messes in the kitchen anymore and that her willingness to learn kept growing. By that time she was already finishing school but, despite her talent, her parents thought this would not be a productive career. She left her dream aside and started to study something else, thinking that maybe she was wrong and cooking was not her vocation. After studying for several semesters, she realized she did not enjoy what she was studying. Being already an adult, she started to work and earn income to cover the costs of her dream. This is how she heard about Campo Alto, where she could have the opportunity to make her dream come true. She is currently about to start her studies towards her goal. She has found out about Kiva and would like to count on its support, which would represent a significant help in paying for tuition.