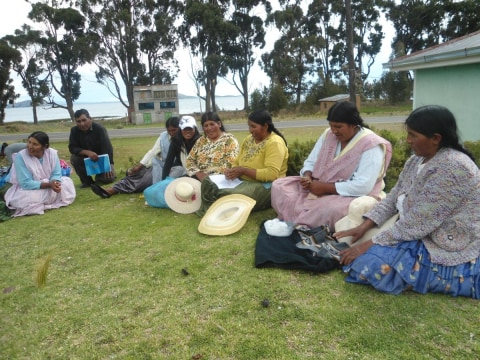 The "UNION CHUA CAYACOTO" is starting its third loan cycle with Pro Mujer, as part of the Achacachi focal center. It is made up of eight members, and is led by an executive committee of which Sabina is the president. The business that all of the members of the communal association carry out is catching fish and then selling the products, which they do in their communities. The loan that is being taken will benefit small microbusiness owners such as Sabina. She says that this is the third year that she has belonged to Pro Mujer, after having been invited by an organizer from the organization who came to visit her in her home. She now has a business catching and selling fish. She says that this was a family business that she learned from her parents, as she helped them since she was a child. Later, she decided to start her own business with her partner. The loan will be sued to increase her capital (by buying fishing nets) that she will acquire from wholesalers in the city of El Alto and then install in her fishing business. This type of work allows her to earn income to support her family, as she lives in a common-law relationship and has three children. When asked what she likes about Pro Mujer, she responded that she likes the training that the organization offers.