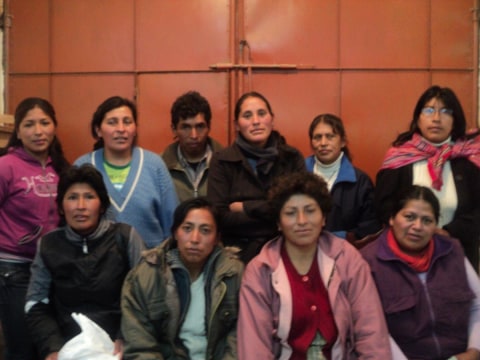 A loan helped to buy special feed for cattle.

Delma is a 47 year-old woman. She has worked with Edaprospo for six months. She is single. She has always worked farming and raising cattle, because her parents taught her this. She also sells the milk that her herd produces. Her various jobs have helped Delma a lot, because they are a way to contribute to the community that she belongs to, where everyone works in farming and raising cattle. She works to support her nephews. In the future, she would like to have more head of cattle and become a microenterprise. She likes to do group work, because she is very friendly and because they support each other as they grow their businesses. Delma only has words of thanks for the support she has received, because in this way she will fulfill her dream of traveling out of Perú and getting to know other countries. In the photo, she is wearing a blue sweater with a green shirt. She is the second person from the left in the second row. The man that is seen in the photo is the husband of one of the members.