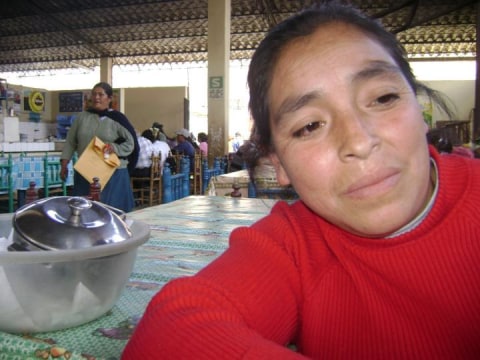 A loan helped To purchase gas at wholesale and replace dining utensils and furniture.

Rosa is thirty-seven years old and is a member of the Community Bank “Virgen de Asunsion de Carhuaz.” She dreams of rustic playground to meet and make many friends. She along with her husband are trying to raise their six little children in Jr. Union s/n, District and Province of Carhuaz, in the village of Ancash.

After the death of her cousin, whom she treated as a daughter, Rosa was intent on breaking away from all the adversities presented to her life, like when her husband was jailed for slander then later acquitted, or when their youngest daughter was very sick last year. Now they are putting all their energy towards the sale of meals in the Model Market at Carhuaz. She along with two assistants prepare meals for the year and her husband, who is a mason by trade, assists on Sundays when they have the most customers.

With a loan of $500 US Dollars, to be repaid in eight months, Rosa and company will buy gas at wholesale price and will also replace dining utensils and furniture that are not in use.