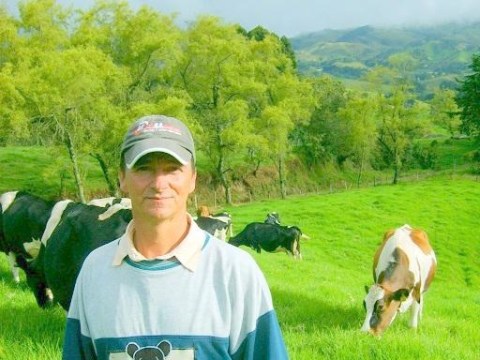 Robeiro is a 50-year-old farmer. He is married and the father of two children. Since he was a kid, his father taught him everything related to the country life. Thanks to this, he is now able to generate the income that his family needs. A friend of his helps him to grow "papa criolla" [a small, yellow kind of potato] and beans in a piece of land he rents. He also owns two milk cows and sells the milk, receiving an additional income with which he covers some home expenses and pays his son for the hay and the concentrated feed they eat. He is known to be persistent, tenacious, dedicated to his job, and to do it with love. He is requesting support with this loan, with which he will buy two milk cows, which will result in an increase in his production and a significant improvement of his family’s income. Robeiro says that his main interest is to continue fighting for his family’s well-being, which is why he will continue to work hard in order to make his dream come true: to buy his own piece of land where he can grow his produce and can raise his animals. This will result in financial stability and better living conditions for his family.