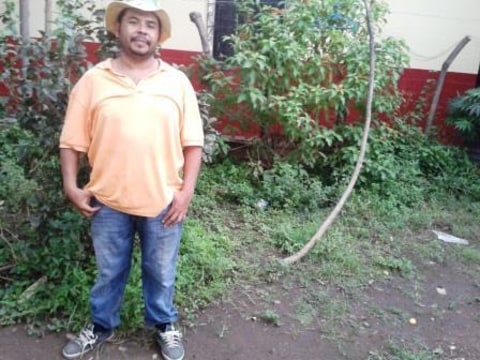 A loan helped to buy construction materials and to pay for labor.

José, 39, is married and the father of three children, ages 10, 3, and 2. He graduated from high school but didn't continue with his education because his father's poor and he had to work to help his family. His wife sells traditional food. José has made a living in agriculture since he was 12. He learned this job from his father and is grateful to him for it now because he's getting his family ahead. For four years he has worked taking care of an irrigation channel. His day begins at 4:30 a.m. While his wife prepares his breakfast he helps her shuck the corn that she'll sell later in the day with tostadas, potatoes, and so forth. Then he goes to work for 5:30 a.m., walking some 30 minutes to get there; he returns home at 6 p.m. He's going to use the loan to repair his house because the metal roofing is no longer good and the adobe walls are washing away from the rain. With the loan he's going to buy 2 dozen metal sheets, 8 pillars, 20 bags of cement, and a truckload of sand; the rest he'll use to pay for labor. José dreams of buying a plot of land in the future because where he lives now belongs to his brother, who gave it to him to build a house. He also dreams of his children graduating from college because he wasn't able to.