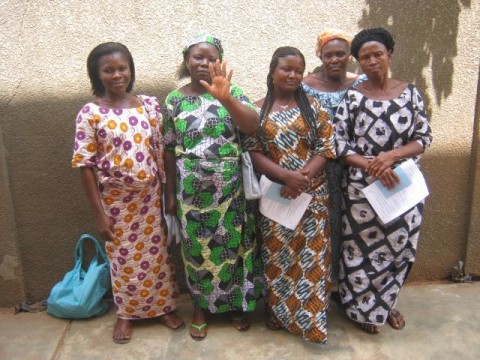 Vivogbe Alegleta Group's loan finished fundraising, but these other borrowers need your support

A loan helped to purchase handbags, shoes, and ointments to sell.

The group VIVOGBE ALEGLETA comprises five persons who reside in the same district and who run revenue-generating businesses. The group's representative, Souhou Rachelle (with her hand raised in the photo), is 43 years old. She has a middle school education and is married to a man named Ousman. The couple have four children, all in school, and two are in their care. She lives with her husband and children. The couple jointly ensure that the diverse household expenses are covered. For this reason, Souhou Rachelle has been selling bags, shoes, and ointments out of her home for about ten years. She gets her supplies from a market in Benin. With the goal of bolstering her business, she joined with the other members of the group VIVOGBE ALEGLETA to request a third loan from ALIDé. The previous ones were indeed paid back.