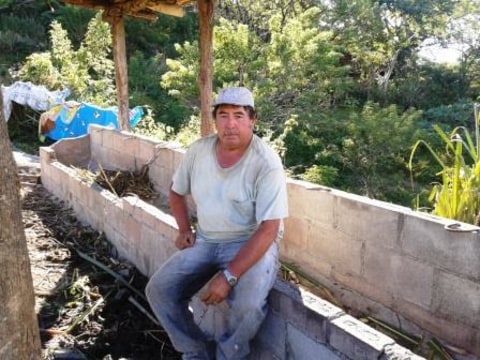 A loan helped to buy a dairy cow.

Alfredo, 49, has been working in agriculture and doing masonry work ever since he was very young. He currently has 4 children attending school in different grades, including high school, 9th grade, 7th grade, and 5th grade. His other children are already grown, but they continue to live in his house. One of them works as a farmer and has other economic activities. Alfredo's wife devotes herself to the household chores. They are a very united family, because each of them contributes to put food on the table and cover other family expenses. Alfredo is a mason by profession; he has about 20 years of experience in this activity, and this is how he provides for his family. One of the things that motivated him in this work was that as a child his dad, who was a mason, would take him to work, and so he learned the trade rapidly and on the job. He was seeing that this was an activity where one could earn money, and so decided to learn this trade very well so that now he is one of the best in the area where he lives. In addition, he has also always worked in agriculture, because this has been another source of income for him. For a long time he had 20 cows, from which he obtained income for his family, but because of some problems he had to get rid of them. Alfredo has involved his children in his masonry work; they are learning how to do the same work that he does. Alfredo will use this loan to buy dairy cows, specifically, he will buy one dairy cow to start producing as he did before. With this, he will be able to obtain another source of income for his family, and thereby improve his children's living conditions as they get an education. He needs to have animals to take advantage of the pasture grass that he has on his lands. In the future, he plans to have 10 milk cows so that he can have extra income in the household. To do this, he is taking the first step, which is to buy the first cow. He already has feeding troughs, and he is hoping that his work will be productive and that he will get good results so that his children can have better living conditions and can succeed and achieve lots of things in their lives.