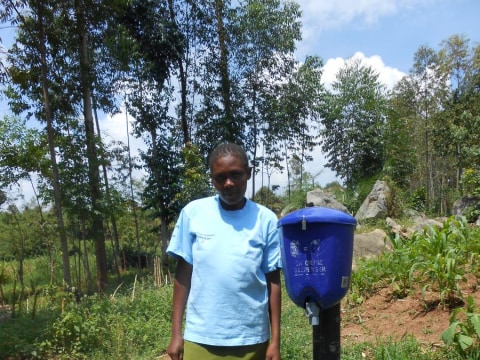 A loan helped To reduce the burden of water-borne diseases by providing access to safe drinking water via chlorine dispensers.

Janet, a friendly, hardworking and trustworthy 26 year old lives in chepkose village in galona sub-location in Kenya with her husband and 3 children. Chepkose village does not have a piped water supply, so the community collects their water from an unprotected spring. This water is easily contaminated with bacteria that can cause diarrhea and other water-borne diseases, meaning that Janet and her family may fall sick and become unable to work or attend school. Janet operates a small business and is also involved in farming, but has also volunteered her time to be the promoter for a new chlorine dispenser program that enables her community to drink safe water and stay healthy. Janet and other promoters in her community need a loan to cover the costs of installing and maintaining chlorine dispensers at the water sources in the area. Janet will encourage the community to treat their water with the dispenser, and refill the dispenser with chlorine as needed. There are four other volunteer promoters from the surrounding community who are part of this group loan: Ebby, Violet, Florence and Irene. Janet wants to be a promoter because she hardworking and likes people. She believes that the dispenser will prevent diseases and kills germs that will endanger the lives of her children, who are below the age of 10 years, and others in her community. The Kiva loan will be repaid by Evidence Action (evidenceaction.org) on behalf of the community, through the sale of carbon credits. Using the chlorine dispenser generates carbon credits by avoiding the need to boil water to make it safe to drink. The sale of carbon credits, to organizations and individuals wanting to reduce their carbon footprint, will be used to repay Kiva lenders and also to make sure that Janet’s community can have access to safe water now and in the future.