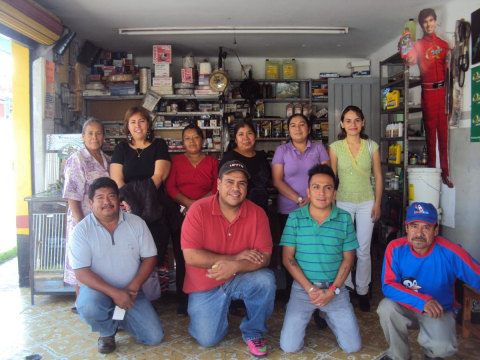 A loan helped to maintain washers and dryers and to buy laundry supplies.

Zitacuaro is characterized as a city of progress, where the majority of the inhabitants work in trade. Daniela is 19 years old, married and has a young daughter who is not yet in school. Daniela explains that she went to school until secondary school, and when she grew up it was difficult for her to find a well-paid job where she could also have days off. So she decided she should open a laundry service, which she established out of her parents' house since she could set up a room for it there. With her own business, Daniela was able to keep an eye on her house and her family. She says that she started this type of business because she once worked in a laundry and she saw that, though it was a difficult job, it was profitable. She is now requesting a loan, and says that it was her sister who invited her to join her group, Poetas, in order to ask for it, as she saw that Daniela was having some problems with her washing and drying machines. Daniela says, "At the moment I am having a lot of problems with turning in the laundry on time, since it takes me a bit longer because two dryers and a washer have broken down, and I need capital to be able to fix them, so I can finish my pending work and not let my clients down." She will also invest in products for washing clothes. She says her dream is to be able to buy three washer-dryer combos-- new ones, as the ones she has, she bought used. The other members of the group are Rodrigo, Irma, Ricarda, Teresa, Eduardo, Beatriz, Elizabeth, Pablo, and Roberto. They will invest their part of the loan in their businesses of buying car parts and oils, running a hair salon, buying and selling frozen foods, buying material and liquids for a unisex beauty salon, buying supplies to make traditional corn-based Mexican dishes, buying sweets and fried foods to sell, stocking seasonal fruits and vegetables and stocking clothes and shoes to sell by catalog.