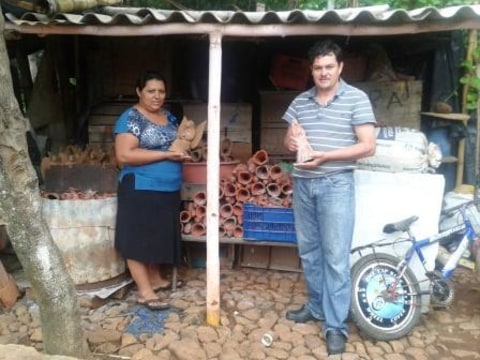 A loan helped to buy paint and clay figures.

José appears in the photo with his wife. He’s 40-years-old and completed high-school with much effort leading to a technical career as a dental assistant; he graduated as a dental assistant. He’s married and his wife works making crafts at home with him. They’ve had four children (a 14-year-old girl and boys that are 9, 7 and 1). Three of them are taking basic education and the youngest does not attend school because of his age. José owns a dental workshop in the city and has ten years’ experience in this activity. In addition, he and his wife make clay crafts that they sell in various cities in the country. He learned this work alongside his wife who learned it at a very young age from her mother who also worked making clay crafts. From October to December they move to a different city to sell them. The loan he’s requesting is to buy paint and already produced clay figures and to pay artisans that have helped him for some time now to finish the products to put them up for sale and to generate higher income by having more products to sell. In future, he wants to increase crafts production because it generates extra income that makes it possible for his children to complete high-school and continue on to university.