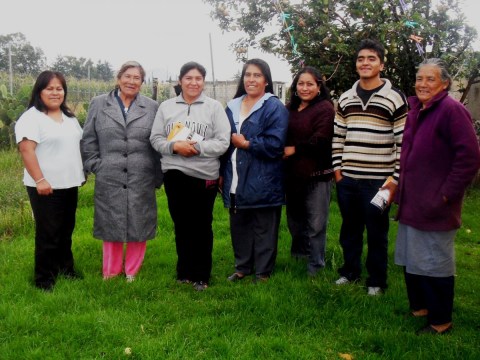 A loan helped to buy ingredients.

The “Unión de Cabecera” group consists of six members. It’s a very small group but they are noted for the unity among them. They chose the group name precisely because they wanted it to be a united group but also because it’s the name of the community they live in. Manuela, 69, is a very hardworking woman. She’s been married to Miguel for many years. He hasn’t worked for several years and only takes care of the drinking water system now. They have formed a family of nine children together some of which are attending secondary school. Manuela works making grilled corn and popcorn to sell outside her house. She relates that all she has to do is set up a small table and a tarp to start selling the corn. She only sells weekends on Friday, Saturday and Sunday. She takes advantage of these days because that’s when she sells the most; she’s been in business six years now. Manuela says: “Previously I had no idea how this type of Mexican snack food was made. The business belonged to my daughter but she had to leave it to go work in Mexico City. But when I saw the large clientele she had I decided to continue with it myself.” Manuela is very grateful to Kiva and to VisionFund because when she started selling the corn and popcorn she could only sell 50 because her money didn’t stretch any further than that to buy more. However, she found out about the loans and that’s how she decided to request one. Little by little her sales have increased and now she sells 100. She adds chicken legs to her corn and was able to accomplish this thanks to the support and to her great effort. She comments: “I have no difficulty and am very happy with my business because I don’t have to make much of an effort to carry it out. Also, because I’m an older woman I could no longer find employment easily and by selling corn and popcorn I’m able to insure my future.” In addition to the corn and popcorn sales, Manuela also raises small animals like chickens, turkeys, ducks and piglets to sell. Her dream is to be able to have a locale in which to sell her Mexican snacks because it isn’t too safe to sell in the street any more. The other group members also have great dreams and are requesting their loans to invest in their businesses to reach their goals. Silvia, Ángela and Imelda will invest in their grocery stores, Josefa and Flora will invest in pigs and Juan will invest in turkeys.