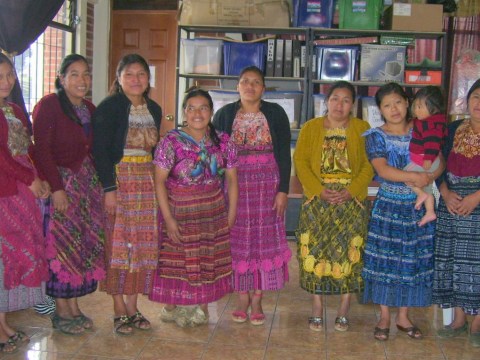 A loan helped to buy different kinds of fabrics, yarns, and beads.

The Friendship Bridge Trust Bank, “Buganvilias”, was formed five years ago in a rural area of Cantel Quetzaltenango in the western highlands of Guatemala. The group is composed of eight members who will gratefully receive micro-loans for their productive activities. Juliana is a 40-year-old married woman with six children who range from eight to twenty years of age. Each one of them attends school and the oldest daughter is in college. Juliana is thrilled with their educational progress. Juliana works in the textile industry and manufactures beautiful, traditional Guatemalan blouses called “huipiles” (pronounced “wee-peeles) from various villages including her own. She also makes the pretty, adorned aprons that the women wear as part of their daily attire. Juliana not only manufactures and sells her products in her usual venue but also takes special orders as well which she delivers every eight days. Juliana’s business is progressing well and looking toward the future, she realizes that she needs to keep injecting financial capital to it. For that reason, she is applying for her 3rd loan cycle with Friendship Bridge and is requesting a loan of US$720. She will use the funds to buy different kinds of fabrics, yarns, and beads to decorate the huipiles. Juliana is excited at this opportunity to as it will allow her to sustain and grow the business. The income generated will be used to provide a better quality of life for the family including opportunities for improved healthcare and education. One of the biggest achievements that Juliana has achieved is having her 20-year-old daughter in law school. Juliana and her husband are making it a priority to keep each of their six children in school as they are aware that this is a real key to a more successful future for them. Juliana only attended school through the sixth grade as her parents thought that was enough time for her. Juliana is the Secretary and Member of the Board of Directors of the “Buganvilias” Trust Bank. She, along with the rest of the members of the group, are most excited to receive new loans. Many of the ladies are involved in textile production and will use their loans to sustain and improve their business. They are most grateful for this opportunity and look forward to a more successful future for themselves, their families and their community.