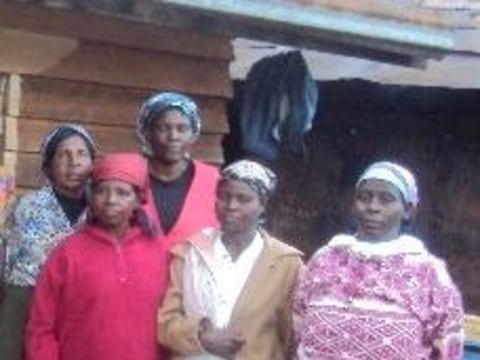 Umoja Group's loan finished fundraising, but these other borrowers need your support

A loan helped to construct a Bio-Digester for home energy.

Umoja group is a group of woman from Eastern Kenya Meru region near Mount Kenya. It was started in 2012 to empower women with renewable energy and especially biogas since their region has a big problem with fuel for cooking. The plight of many women when it comes to firewood and charcoal can be likened to that of Lucy. Lucy, second from right, is a middle aged woman. She is a mother of six and lives with her husband and her extended family. Lucy is a small scale farmer practicing dairy farming and owns a small piece of land where she grows food crops. With 4 cows, Lucy is able to sell at least 26 liters of milk daily and this forms her main source of income. Her husband works seasonally as a casual laborer to add to the family income. Her main source of fuel is kerosene for lighting, as well as firewood and charcoal which are illegally acquired from the forest. This comes with a lot of challenges like women being sexually harassed by the forest guards, sometimes being arrested for trespassing forest reserves, sometimes being attacked by wild animals, and many other challenges. With the heavy load they have to carry they also develop back and joint problems. With the campaign against deforestation in Mount Kenya forest, Lucy and her friends decided to have a biogas plant installed for them and they approached VEP for advice. Due to their many financial commitments, especially school fees for the kids and feeding the family, they opted for a biogas loan. With biogas Lucy and the others will save on fuel cost for cooking and lighting. They will also promote afforestation and a clean environment. Lucy’s immediate and extended family will also benefit from the bio slurry which will be used as fertilizer on the farm. In the end, she will save more money for her basic needs and will be in a better position to repay the loan.