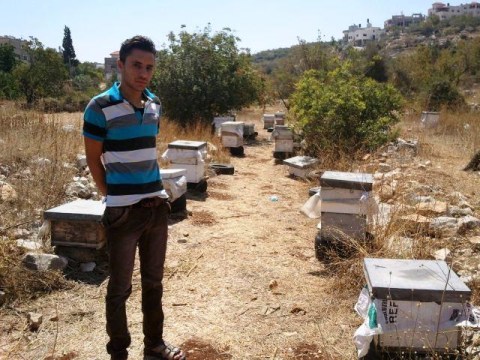 A loan helped to buy more beehive boxes for his business.

Husam is a 25-year-old, single man from a small village called Attel, near Tulkarem. He lives with his family in a simple, small house in the village. Husam's father is a teacher in a local school. He gets a low income which is not enough to cover all the family's needs. For five years, Husam has been working in beekeeping. It is very profitable work, but needs a lot of effort. Husam now owns 45 beehive boxes and he would like to increase them. This will increase his productivity and also his income. Husam took a USD loan from Palestine for Credit & Development (FATEN). This loan will help him to buy more beehive boxes for his business. Husam appears in the photo at his place of business.