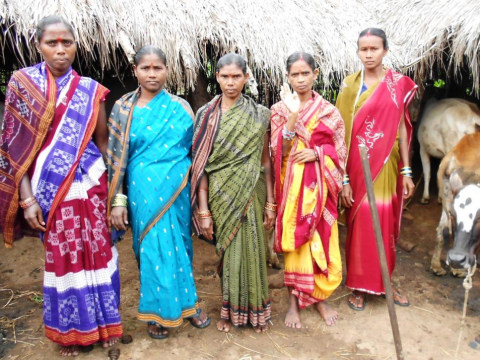 A loan helped To pay for purchasing a cow.

The name of this group is “Maa Durga” .This group was formed in the year 2010 by five women members of Below Poverty Line category from the village Kalsaipali in the district of Bolangir in Odisha; India to access loans from Mahashakti Foundation. Kalsaipali is a small rural village located five kilometers away from the district headquarters of Balangir. All households of this village belong to the milkman community and their main income source is milk selling, along with cultivation. Sankar is one of the members of this group. She is standing second from the right with raised hand in the photo. She is 44 years old; living with her husband and two sons aged 18 & 12 years. Sankar is running her conventional business of milk selling, having five cows. She gets 15 liters of milk per day. Her husband supplies this milk to the households of the railway colony of the town. Apart from this her family cultivates vegetables in the backyard and her elder son has been running a mobile phone repair centre at Balangir town for the last two years. From the above businesses Sankar gets a monthly income of 10,000 INR. But according to Sankar, the present income is insufficient and she faces lots of financial troubles in covering fodder expenses, investment in the mobile repair center and household expenses. So, as there is growing demand for milk in the locality, she has planned to utilize the present loan for purchasing another cow of improved variety to add some extra income to her family. Sankar says this will help her to provide some financial help to her son and save some money for the construction of a house and digging a well for vegetable cultivation. Sankar has also a dream to develop a dairy farm in future. The other four members of this group are Ulas, Surubali, Sasthi and Brundabati with similar milk businesses.