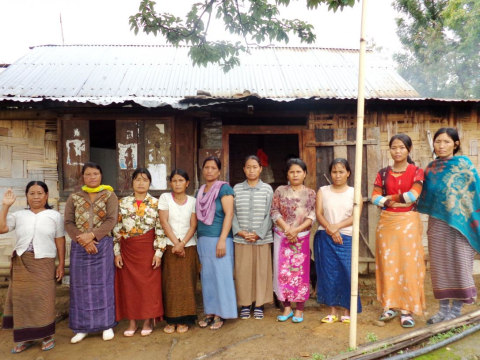 A loan helped to purchase bags of wheat and flour, edible oil, and stock for her tea-stall.

With sweat on her face and hands, Nichoibong says, “It is not easy to run a tea-stall in summer,” and heaves a sigh. Nichoibong is short in height, studied until primary level, and runs a tea-stall for her income. Her tea-stall is also captured in the picture where the group member stands in the front of the tea-stall. She belongs to Olive SHG Group and is the featured borrower member for the group. She is pictured with her hand raised. All the members live in the same village, and all are engaged in income-generating activity. The group was formed to encourage, motivate and be financially independent. The village is about 30 kms away from the main town of Imphal, and it is also one of the capital states in the northeastern states of India. Nichoibong has been running the tea-stall for more than a couple of years, and before this she used to grow chives and sell them. The tea-stall is in the front yard of her house, and it is built with a tin roof, knotted bamboo and no concrete flooring. The tea-stall is open at the break of the dawn and closes down at sunset. She sells tea, toast and puri (fried flatbread) in the morning. Most of the time she uses firewood and charcoal for heating, as the liquefied petroleum gas is expensive. The firewood is sometimes collected by herself from the nearby fields to save some income. She usually gets the supplies from the main city market, and she also purchases on credit from the village grocery shop. Nichoibong prepares good tea with tasty puri and toast, which is the main attraction for the villagers. People buzz in during the early morning to have tea and puri for breakfast. At daybreak, elders hang out at the stall and kill time. Farmers also stop at the tea-stall in the evening when they return from the field to have a cup of tea. Her warm and humble nature attracts people to sit and have tea at the stall. The generated income is mostly used to manage the family expenses, and the case gets worse when the credit repayment from customers fails. Nichoibong wants the loan to purchase bags of flour and wheat, milk powder, edible oil and extra gas. With the stock list, she will be able to run the business efficiently without worrying about the next day. She will open an account and start monthly savings for the future, and also repay the loan on time. She is happy that Kiva and WSDS create a platform for women who need financial support, and she wishes them good luck. The rest of the group members are also engaged in a piggery, vegetable-selling, poultry, etc.