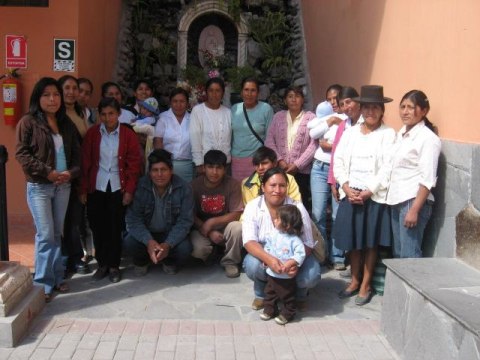 The San Jose Village Bank is a new bank recently initiated with eighteen members. The members are from the Yanamilla neighborhood located thirty minutes from the city of Ayacucho, where many of them migrated to the city or settled (without land title) on land where many do not have basic services. The members have different businesses such as selling vegetables, meats, food, ice cream, firewood, groceries, clothing, fruit, and cereal. Every member has a different story. For instance, Vilma is a single mother with a six-month-old son. Vilma sells firewood in her house and with her loan she will start a project to sell CDs and disks. On the other hand, Julia travels every week to the Ayacuchan Jungle where she sells vegetables, traveling on Thursdays and returning on Sundays. Also, Hayde sells sachipapas (sausage and fries) streetside in the center of Ayacucho with the help of her husband. She has her business on the weekends from six at night to five in the morning. The bank members need varying amounts of loans, ranging from 300, 600 up to 900 soles, and totaling 9,300 Peruvian Nuevos Soles to be lent to the village bank. The loans will be invested to buy noodles, firewood, disks, cooking oil, potatoes, beans, oats, corn, vegetables, and clothing. The dreams of the bank members are to buy their own cars to rent out as taxis, construct their homes, to provide a good education and sustenance for their children, to expand their businesses, and that their children may become professionals.