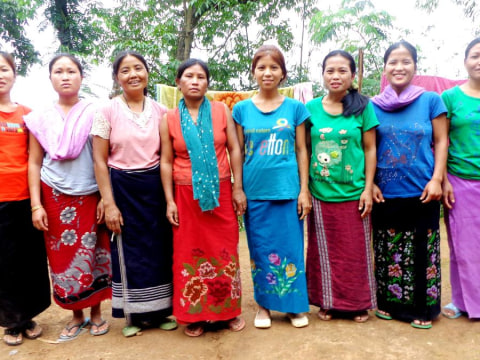 Lenchonghoi Group's loan finished fundraising, but these other borrowers need your support

A loan helped To purchase more stock like rice, soap, cereals, etc for the general store to earn more profit.

26-year-old unmarried Linroukim is the featured borrower member for Lenchonghoi group. Graduated from a government college and possessed a caring and strong personality, sincerity in work and great determination is Linroukim’s character. She is on the extreme left in the picture with her hand raised. All eight members belongs to a tribal community and live in a village which is about 40 kms away from the state capital of Imphal, which is one of the North-Eastern state capital in India. As an eldest daughter in the family, she takes on the role with passion and has shown immense sincerity in whatever she does for the family and for herself. Linroukim runs a general store in the village. The store is located at the other end of the village, on the closer side of the town market. The town market is where people from all neighbouring villages have stores and run their businesses. She sells imported rice, salt, chillies, sugar, milk, potatoes, onions, ginger, garlic, different items of cereals, detergent soap, detergent powder, hair oil, sachets of shampoo, local delicacies, etc. She is in charge of the store only in the morning and in the afternoon as she teaches in primary private school during the daytime. Her mother usually replaces her in daytime and she closes the accounts at the end of the day. Linroukim's father’s income is insufficient to support the family with her three younger siblings in different schools. She initiated all possible ways to share her father’s burden and started earning by opening a general store besides teaching in a school. On restricted holidays she usually gets the supplies from the town market and sells them in the village. The generated income is not enough to refill the stocks on a regular basis as her father’s income in unreliable and irregular. Most of the expenditure is borne by her to fulfill the family's needs. She wants a loan from Kiva to purchase more supplies for the store. She will buy all the essential goods like rice, edible oil, wheat by the bag, flour by the bag, soaps, shampoos etc. Expansion of the store is the vital plan as she wishes to continue the general store even after she is married. Another future plan she has with her family is to re-construct their house; the leaking roof during rainy season and the dilapidated condition of the roof and mud walls needs to change. If their plans are successful then they will build the house very soon. Linroukim thanks Kiva and WSDS for helping her achieve some portion of her plan and which will eventually become the platform to start off. She says "thank you so much, Kiva”. She also shares that she will repay the loan on time without fail and will continue to grow.