Our partners are MATCHING loans to women entrepreneurs in the U.S.! Click here to lend. 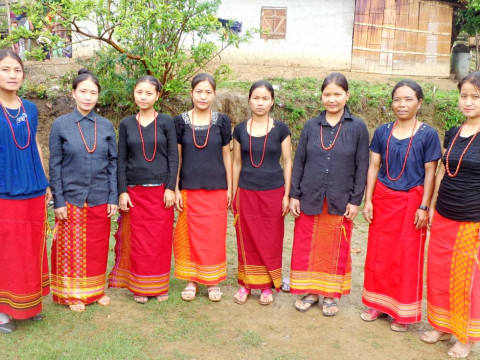 A loan helped To purchase a calf, raise it, and use it for other purposes to generate income for the family.

Lhingneikim is pictured with her hand raised on the far left in the picture. She is the featured borrower member for Gamthum Group. At 30 years old, Lhingneikim is married with six kids and lives in a village with her husband. The rest of the group members also live in the same village close to one another. The village is about 40 km away from the city capital of Imphal, which is also one of the state capitals for the north-eastern states of India. Her husband and she work side by side to meet the needs of the family. Her husband rears cattle, feeds them, and does businesses to generate income. She grows vegetables on the hill-slopes in the village and sells them to women selling vegetables at the town market. Lhingneikim is a farmer who supplements the family income by selling vegetables, grown by her on the distant hill-slopes in the village. She grows beans, cabbage, cauliflower, ladyfingers, pumpkins, yams, chives, potatoes, and spring onions. She also grows local vegetables found only in the states and eaten only by the local people. Although her main business is growing vegetables and supplying vegetables to the women vendors, most of the time she is busy raising cows. She feeds them, cut their fodder, bathes them, vaccinates them, and milks them. The investment in raising cattle is more profitable than selling vegetables, shares Lhingneikim. Therefore, she decided to spend more time raising cattle in addition to growing vegetables. She will be engaged in both activities now. She wants loan from Kiva to purchase a calf and raise it. Luck favors them both, Lhingneikim and her husband, when raising cattle. The cattle are taken to the nearby field to eat grass and, when they are fully grown, they are sold in the village as well as in the neighbouring villages. She also sells the milk and generates income. She thanked Kiva and WSDS for the support and will remain obliged for the kind gesture. She will also repay the loan on time and try hard to be financially independent. Last but not least, she says, “Thank you, Kiva”. The rest of the group members are engaged in piggery, weaving, and selling vegetables.