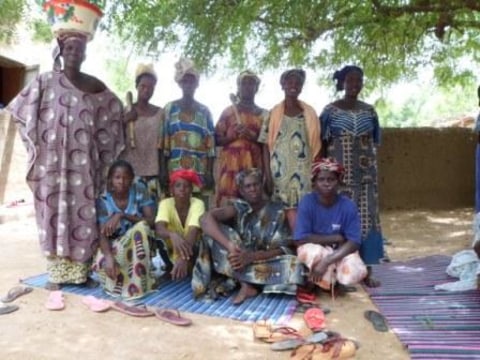 Djekafo 1 Group's loan finished fundraising, but these other borrowers need your support

A loan helped to buy small tools, seeds, farm inputs, and to cover the cost of weeding in her fields.

The ten women who make up the Djekafo 1 group are all married within traditional families. They are, on average, 40 years old and they have an average of three children each. They all live in the village of Togo in the region of Ségou (fourth administrative region of Mali.) They know one another through their farming activities during the rainy season and also through ties of neighborhood, marriage and kinship within the village. They grow peanuts, millet, and rice. In order to buy small tools, to stock up on farm inputs, and to cover the cost of weeding in their fields, the members of the group have joined Soro Yiriwaso and are on their fifth cycle of farming loan. Alimata, a member of the group, is an important farm work leader during the rainy season in the village of Togo. In the photo she is in the front row, first from the right. She plans to use her loan to buy seeds and farm inputs in Ségou, as well as small tools from local blacksmiths. She will also hire young people to weed her field. She sells her crops for cash at the end of the rainy season, and she uses her earnings to repay her loan, to take care of her children, and to cover some of the family's expenses.