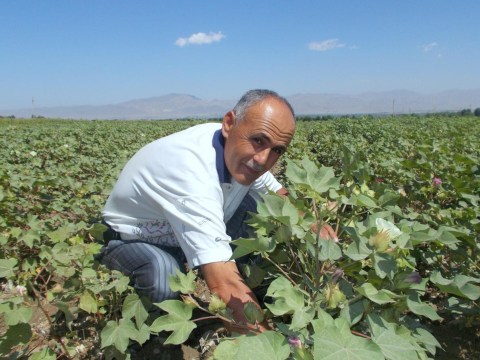 Khojmahmad's loan finished fundraising, but these other borrowers need your support

A loan helped to buy mineral fertilizer to receive a rich harvest.

Khojmahmad lives in the Rasulov region of Khujand, which is located in the Sogdian Oblast in the north of Tajikistan. Khojmahmad is 54 years old and he is married with a large family. He is the father of seven children - six daughters and one son. He has a higher education and for a few years he has worked in a government office of his district, a "djamoat" (from the Arabic "djamaa" - society, group, community). Every village in the region has a djamoat (smaller regions), and the djamoats are in the villages. Khojmahmad is also involved in agricultural work. He has a private farm, a "dekhkanskoe," where his wife helps him grow his crops. A dekhkanskoe is a small, individual or collective private farm on which a few people work and where the main crops grown are cotton, wheat or vegetables - these occupy about 60% of the irrigated land in Tajikistan. Khojmahmad combines his work at the djamoat with his agricultural work. Neither one are enough to feed his whole family. He has been involved in farming for more than 20 years. He learned all about it from his father. Khojmahmad is asking for a loan to buy mineral fertilizer so he can receive a rich harvest.